On February 9, the International Wine Review attended the 9th annual Kosher Food & Wine Experience (KFWE 2015) at the Metropolitan Pavilion in New York.  The event welcomed more than 700 industry professionals and included an impressive lineup of Israeli winemakers and representatives.  In a follow-up to our Report # 32 The New Wines of Israel, we used the occasion to visit with a small group of top winemakers whose wines are represented in the United States by Royal Wine Corporation, headquartered in Bayonne, NJ.   Royal is the world’s leading importer and distributor of kosher wines and spirits, and its wineries include some of Israel’s largest producers such as Carmel, Binyamina and Barkan,  and  outstanding boutique wineries such as Flam, Domaine du Castel, Matar, Tulip, and Or Haganuz.  While our tastings were extensive, we concentrated on just five, outstanding kosher boutique wineries.

Located in the foothills of the Jerusalem Mountains, Flam has been a consistent producer of high quality wines since its first releases in 1998.  The winery was first established by brothers Golan and Gilad Flam, and the wines today are produced in a state-of the-art winery with a helpful hand in the vineyards from their father Israel Flam.  Flam sources its grapes from 20 parcels, large and small, and ferments them separately for its different cuvees. Christian Sommer, formerly of Chateau Latour, has been hired as consulting winemaker.  Flam is among Israel’s top wineries as exhibited by these wines.

Flam 2013 Blanc Jersualem Hills  89 The Blanc is a 60-40 blend of Sauvignon Blanc and Chardonnay. Fermented in stainless steel, it is crisp and fresh-tasting with hints of citrus, high acidity, and a lively finish.   Flam 2013 Rosé Jersualem Hills  89 This rosé is mainly of Cabernet Franc and made like a white wine and fermented in stainless steel for 3-4 weeks. Light orange in color,  it is aromatic and flavorful with a crisp dry palate of stone fruit and minerals.  Flam 2012 Classico Jersualem Hills  89 The Classico is a blend of Cabernet Sauvignon, Merlot, Cabernet Franc, Petit Verdot and Syrah. It has a perfumed nose combining dark fruit and hints of smoke. Aged 10-12 months in barrel and a year in bottle before release, it is light-bodied and elegant on the palate with round tannins and a pleasant finish.   Flam 2010 Syrah Upper Galilee 90+  This delicious Syrah is sourced from two single vineyards in the Upper Galilee. It displays ripe red fruit flavors with an elegant mouth feel including soft round tannins. The wine is aged 14 months in barrel and and 12 months in bottle.  Flam 2010 Noble Upper Galilee and Jersualem Hills  91  The 2010 Noble is an exciting new blend of Cabernet Sauvignon, Merlot and Petit Verdot. Crafted in small quantities, it is an elegant wine with a light texture but intense flavors of black currant, toasted oak and herbs. It is made for aging, and should last up to a decade. The tannins are still firm and need time to resolve for maximum enjoyment. A terrific wine. 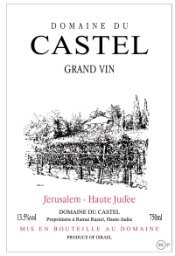 Domaine du Castel produce four excellent wines, all beautifully crafted and Old World in character.  A family estate, it was founded in 1988 by Egyptian-born Eli Ben Zaken. The estate is located in the Jersualem Hills in Ramat Raziel, ten miles west of Jerusalem at 2,300 ft.  Ben Zaken produces 10,000 cases of wine annually from both his own high density, low-yielding vineyard and from local growers he supervises under contract.  Ben Zaken serves as winemaker and now works with his sons Ariel and Eytan.

Domaine Du Castel 2012 “C” Blanc du Castel Jersualem Hills  90 The 2012 “C” Blanc du Castel is 100% Chardonnay. It is ripe and delicious revealing aromas and flavors of tropical fruit and oak. It is nicely balanced with good acidity and mineral notes. Appears riper and more oaky than the 2010 vintage. Domaine Du Castel 2014 Rose’ Jersualem Hills 88+  This newly released rose displays a lovely pink salmon color and is very fruity and dry with hints of fresh strawberry and a crisp finish. .  Domaine Du Castel 2012 Petit Castel Jersualem Hills ($) 91+  The Petit Castel is a blend of Cabernet Sauvignon, Merlot and Petit Verdot. It displays a bright ruby red color and aromas of red berry fruit. It is rich and flavorful on the palate offering  black cherry, graphite and minerals. Light and elegant in style, it is aged 16 months in second-year French oak. Domaine Du Castel 2011 Gran Vin Jersualem Hills  92   A blend of Cabernet Sauvignon, Merlot, Cabernet Franc and Malbec, the Gran Vin is a gorgeous wine, beautifully balanced with red and black berry fruit flavors. it is soft and round on the palate with ripe tannins and and elegant and refined finish. Aged 20 months in new French oak. 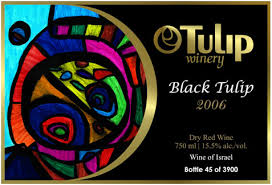 This boutique winery was established in 2003 by the Yitzhaki family in “Kfar Tikva” (a community focused on providing jobs to learning impaired adults) located in Kiryat Tivon near Haifa. The winery, which only became kosher in 2010,  is committed to producing high quality wines at affordable prices and sources its grapes from two vineyards in the Upper Galilee and Jersualem Hills.  Winemaker David Bar-Han crafts wines that are fruit forward, elegant and rich in flavor. The Tulip Reserve and Grand Reserve wines are top of the line.

Tulip 2013 White Franc Jersualem Hills and Upper Galilee  87+  The White Franc is an interesting blend of 65% Cabernet Franc and 35% Sauvignon Blanc. Fermented in stainless steel it is semi-dry and fruity (strawberries and apples) for everyday drinking. Tulip 2011 Mostly Cabernet Franc Jersualem Hills 88  This is a light-bodied wine consisting of 85% Cabernet Franc and 15% Merlot. It offers aromas and flavors of red and black fruit with a hint of herbs. Aged 12 months in mainly used barrels, it has round tannins and a pleasant finish.  Tulip 2011 Syrah Reserve Upper Galilee  92  This Syrah is a blend of 95% Syrah and 5% Petit Verdot. Sourced from the furthest northern vineyard in Israel, it is an elegant wine with black spicy fruit aromas and flavors. Aged 18 months in French oak, it exhibits good concentration of flavor and a persistent finish.  Tulip 2012 Black Tulip Jersualem Hills and Upper Galilee 91+ The Black Tulip is Tulip’s top-of-the-line bottling consisting of Cabernet Sauvignon, Merlot, Cabernet Franc and Petit Verdot sourced from the best barrels for each variety. It is an elegant wine, beautifully structured with ripe black currants and cassis flavors. Aged 24 months in new and used barrels, it has firm round tannins and a long finish. Only recently bottled for the event, the wine needs time to evolve and will improve with age.

Matar is a new kosher wine label developed by Pelter Winery.  This excellent winery was established in 2002 on the Golan Heights by Tal Pelter who studied agriculture at the Weizmann Institute of Science in Rehovost, Israel and viticulture in Australia.  He also gained winemaking experience in Australia working with winemaker John Griffith at Darlington Estate and Evans and Tate.  Nir Pelter is CEO and co-owner of Pelter and Matar wineries.  Nir joined the winery in 2005 after extended military service.  The winery sources Chardonnay, Cabernet Sauvignon, Merlot and other grapes from vineyards in the Golan Heights, Upper Galilee and Jerusalem Mountains.    This is the first vintage of Matar and based on our tastings, the new label is off to a very good start.

Matar 2013 Sauvignon Blanc Semillon Galilee 89 This blend of 80% Sauvignon Blanc and 20% Semillon displays a fruit forward citrusy palate with hints of tropical fruit. It has good intensity of flavor and a crisp finish. Matar Chardonnay Galillee 90  This is a delicious fruit forward Chardonnay with beautifully integrated oak. Aged eight months in 300L barrels, it shows hints of white Burgundy with a good deal of elegance and refinement on the palate and a persistent finish.   Matar 2012 Cumulus Galillee88+The Cumulus is a blend of Cabernet Sauvignon, Merlot and Cabernet Franc. It offers aromas of red berry fruit and herbs with a good deal of persistence, albeit it is rather light-bodied and tannic on the mid-palate and finish.  Matar 2012 Petit Verdot Jersualem Hills  88+   This 100% Petit Verdot displays light aromas of black currants, chocolate, toasted oak and vanilla.  Aged 14 months in oak barrels, it has youthful fruit flavors, firm tannins and a moderate finish. Matar 2012 CB 2012 Upper Galilee and Jersualem Hills 87+ The CB 2012 is a blend of 44% Cabernet Sauvignon, 44% Shiraz and 6% Petit Verdot and 6% Cabernet Franc. Offering aromas of dark plum and violets, the wine is surprisingly light-bodied with modest flavor intensity, firm tannins and a dry finish.

Established in 2005, Or Haganuz Winery is located in Or Haganuz  village at the foot of Mt. Meron and has vineyards in the Northern Galilee at 780 to 870 meters above sea level.  Its first harvest was in 2006 and its total production today is around 30,000 cases.

Or Haganuz Marom Cabernet Sauvignon Single Vineyard (Northern Galilee) 89 This 100% Cabernet Sauvignon is sourced from the Shamai vineyards mainly composed of terra rosa.   The wine combines aromas of graphite and earth and is rustic in character.  Or Haganuz Marom Cabernet Franc (Northern Galilee) 88+ Sourced from the Eviatar Vineyard, the Cabernet Franc exhibits black currants, graphite, herbs and minerals. It has a soft texture, good concentration and a long finish. Or Haganuz Namura Cabernet Sauvignon Single Vineyard Special Reserve Northern Galilee (90)  The Namura is one of the winery’s top cuvees exhibiting elegance and refinement on the attack  with dark ruby and earthy flavors.  It reveals good concentration of dark fruit flavors,  soft round tannins, mineral notes and a persistence finish.   Or Haganuz  French Blend, Upper Galilee 90+   Another top cuvee, The French Blend combines Cabernet Sauvignon, Cabernet France, Merlot and Petit Verdot.  It reveals a smooth and elegant followed by concentrated dark fruit and earthy/mineral  flavors.  The wine has lovely round tannins and a persistent finish.

Although Israel’s wines  have received positive reviews from professionals like us, Israeli wines are still relatively unknown to wine enthusiasts. Today there are some 300 wineries, both large and small, throughout the country from the Lebanese border to the Negev producing 3 million cases from more than 5,000 hectares (12,300 acres) of wine grapes.  Although the industry is dominated by a handful of large producers, there are many new and outstanding boutique wineries and “garagistes” both kosher and non-kosher who are handcrafting wines comparable to some of the best in the world.

We wholeheartedly recommend wine enthusiasts to explore Israeli wines and to consult our Report # 32 The New Wines of Israel, for information on Israel’s wine regions, vineyards, wine making,  promising young winemakers, and hundreds of additional wine reviews.   Individual copies of the report can be purchased on www.i-winereview.com

This entry was posted in Countries and Regions, Israel and tagged Featured, Kosher. Bookmark the permalink.