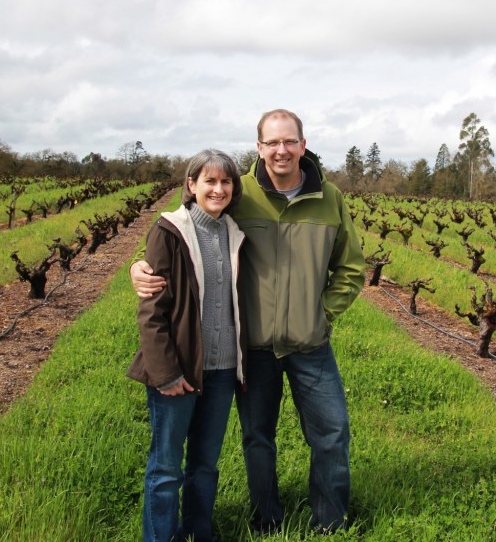 Mike and Kendall Officer launched their Carlisle Winery and Vineyards in 1998 with the goal of creating small lots of distinctive, world-class wines from some of California’s most special and unique vineyards—the old vine Zinfandel and field blends found throughout California and especially in Sonoma County.  While preparing Report #44: The Wines of Sonoma County, we sat down with Mike at his new winery to taste several of the Sonoma County wines he produces, including 18 from head-trained vines on plots planted between 1881 and 1934.  Total production is about 7 thousand cases.

While not well known outside the world of old vine, Zinfandel fanatics, Carlisle Winery has become one of California’s most accomplished producers of old vine Zinfandel and red Rhone varieties. Mike and Kendall had no vineyards of their own until recently when they purchased the Carlisle Vineyard that was planted in 1927 by Alcide Pelletti. They also just recently moved to a new winery after making wine for 14 years in a custom crush facility. The wines are so highly regarded by the cognoscenti that almost all is sold through Mike’s mailing list.  Mike is co-founder of the Historic Vineyard Society with Morgan Twain-Peterson of Bedrock Winery. The Society documents the many special old vines of Sonoma and elsewhere. Excellent descriptions of all the vineyards where Mike sources fruit can be found on the Carlisle web site.

With the assistance of winemaker and viticulturist Jay Maddox, Mike makes wine from a number of Sonoma’s prized vineyards that are populated by old vines, typically Zinfandel and an assortment of mixed blacks like Petite Sirah, Mourvedre, Carignan, and as many as 30 other varieties, some quite obscure. Originally planted in the late 19th and early 20th centuries, often by Italian immigrants, many of these old vines were ripped out and replaced by more productive varieties planted using modern trellising. Others were the victims of the phylloxera epidemic that hit Sonoma in the 1880s and had to be replanted. However, some of the best old vine vineyards survived [see below]. Originally dry-farmed and planted with very wide 10×10 spacing, some have been interplanted to reduce spacing with the addition of drip irrigation. 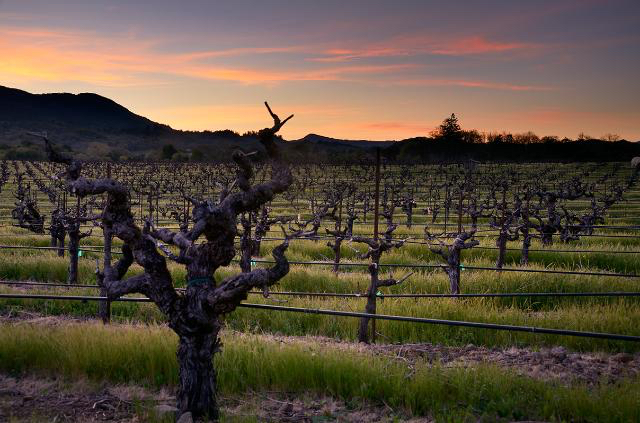 Bedrock Vineyard Bedrock Vineyard is located in the Sonoma Valley banana belt where the temperatures are warm and there’s less fog and wind intrusion. Bedrock is today famous for its 35 acres of 125 year-old vines (mostly Zinfandel but, also, mixed-blacks and 30 other obscure varieties) and the magnificent wines produced from them by Sonoma’s outstanding wineries, including Bedrock Wine Co., Ravenswood, Carlisle, Dashe, and Windgap. However, it’s also famous for the historic personalities tied to it.  Originally part of the Mexican land grant owned by General Vallejo, Comandante of Alta California, it was purchased by General Hooker in 1856 with the financial backing of William Tecumseh Sherman, who later led the infamous March to the Sea during the Civil War. Hooker planted the first vitis vinifera vines at Bedrock.  After phylloxera destroyed the vineyard, George Hearst, father of the publisher William Randolph Hearst, purchased the vineyard and began replanting in 1884. Eventually, the vineyard ended up in the hands of the Domenici family, who farmed it for 100 years before selling it to Joel Peterson in 2005. 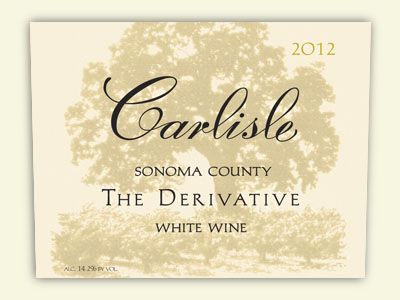 Carlisle 2012 Mourvedre Bedrock Vineyard Sonoma Valley ($40) 91 Bedrock’s 30 acres of old vines dating back to 1888 include two blocks of Mourvedre, which are fermented whole cluster and matured in 20% new French oak. It reveals blue fruit, garrique, and tobacco leaf in an earthy wine with mineral and saline notes. Purity of flavor and freshness show throughout the wine, finishing on a chalky note. Easily handles its 14.9% alcohol.

Carlisle 2012 Zinfandel Dry Creek Valley ($36) 93 A beautiful, refined Zinfandel that reveals the rich, pure red fruit for which Dry Creek is famous. There’s lush red and black cherry and a touch of black raspberry fruit perfectly integrated with nice toasted oak. Sourced from three different old vineyards, including 57% from the Teldeschi Ranch, which was planted in the 1890s. Refined with very good acidity and excellent depth and balance despite the high (15.6%) alcohol.

Carlisle 2012 Zinfandel Carlisle Vineyard Russian River Valley ($46) 95 A blockbuster wine that is also complex and suave. Made of 88% Zinfandel planted in 1927. An amazing 39 different varieties, including several whites, comprise the other 12%, and all are cofermented. The wine is one of the most intricate Zinfandels we’ve encountered with abundant spice, dark red fruit, and forest floor notes on a dense, exceptionally elegant palate that is both bold and lively.

Carlisle 2012 Zinfandel Limerick Lane Vineyard Russian River Valley ($43) 94 Made from old vines (1910) planted in the ferrous soils of Limerick Lane, this is pure, opulent wine. Red pomegranate, red cherry and black raspberry show on the nose and again in the mouth with a velvet smooth texture, finishing fine and persistent. Predominantly Zinfandel with small amounts of Peloursin, Petite Sirah and Trousseau.

Carlisle 2012 Zinfandel Saitone Ranch Russian River Valley ($46) 93 This is a big, earthy wine showing blackberry, huckleberry, red currant, and spice. It’s very rich and full, partly due to the very firm hardpan that devigorates the vines and reduces yields. There’s huge extract on the very, very long finish. Made from vines planted in 1895 and aged in 25% new French oak. The Palomino interplanted with the Zinfandel and mixed blacks was picked separately.

Carlisle 2012 Zinfandel Sodini Vineyard Russian River Valley ($43) 92 The Sodini Vineyard is located at the far northern part of the Russian River Valley, so this Zinfandel has a lot of Dry Creek character. It shows aromas of red fruit, herbs, and a hint of pine pitch. The attack is pure and focused with red cherry and red raspberry, good acidity, and fine tannins. Lovely focus and freshness.