Kenny Kahn, the owner of this small artisanal winery, is a passionate vigneron. He is one of a small group of producers in Alexander Valley in Sonoma County who are deeply committed to producing authentic high quality estate wines. Blue Rock currently has 46 acres of vineyards planted with five Bordeaux varietals and three acres of hillside Syrah. Since purchasing the property in 1987, Kenny Kahn’s goal, has been to create a self-contained European style estate to produce high quality premium wines on a par with Napa Valley. Blue Rock’s vineyards are today densely planted with low yielding vines and are managed following sustainable agricultural practices. The winery is named after the magnesium rich Serpentine rock that makes up the vineyard. 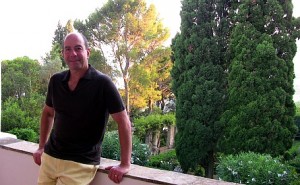 Beginning with its first commercial vintage in 1999, the wines at Blue Rock have been made by the talented New Zealand winemaker, Nick Goldschmidt, who has had extensive experience in Anderson Valley. Blue Rock wines are bold tasting but are well-balanced and not overly extracted. Oak aging is done judiciously. Some of the wines reveal a smokiness from aging in 100% new French oak, but they are also nicely integrated and full in the mouth revealing blueberry, black  currant and layers of complexity. Decanting of these wines one to two hours in advance, is recommended.

The wines reviewed here include Blue Rock’s Cabernet Sauvignon, Baby Blue, a Bordeaux blend made from young vines, and Best Barrels of Merlot and Best Barrels of Malbec made in tiny quantities in the best years. The winery produces 5,000 to 6,000 cases annually which are distributed in 22 U.S. markets and abroad. In view of the small quantities, these wines sell out quickly. If readers can’t find them at their local wine shop, they can contact the winery at: (415) 435-1946.

Blue Rock 2011 Baby Blue Bordeaux blend Alexander Valley ($25) 89
Made from younger vines, the 2011 Baby Blue is a blend of 61% Cabernet Sauvignon and small amounts of other Bordeaux varietals and 5% Syrah. It is made primarily from young vines of the estate and is meant to be drunk early. It is ruby purple in color and offers aromas and flavors blueberry, violets, chocolate and loam. It is soft on the attack with good acidity, followed by firm tannins and a long finish. A delicious wine that probably would be best drunk with food.

Blue Rock 2010 Best Barrels Merlot Alexander Valley ($60) 91
The 2010 Best Barrels Merlot is sourced from a special two-acre parcel. It displays a dark ruby opaque core and aromas of blueberry, plum, sweet charred oak, chocolate and earth on the nose. Aged in 100% new French oak, it is soft and lush on the palate with smoky red and blue fruit flavors, soft round tannins, and a long finish.

Blue Rock 2010 Cabernet Sauvignon Alexander Valley ($45) 91
This 2010 Cabernet Sauvignon boasts ripe and earthy black currant fruit with notes of lead pencil sandalwood, and dried black cherries. It is elegant and refined with good concentration, firm dry tannins and a long finish. It is still rather closed in on itself and would benefit from a couple of years of further aging. If you can’t resist drinking it now, be sure to decant it for at least a couple of hours.