Great Winemakers: Andrea and Chris Mullineux of the Swartland 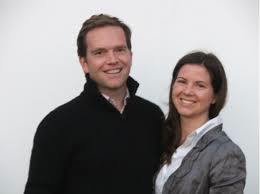 Andrea and Chris Mullineux seem a bit young to be called great winemakers, but it’s a title they’ve justly earned. Not only did we give them rave reviews in our Report # 30 The Wines of South Africa, but the prestigious Cape Winemakers Guild endorsed our assessment when it recently inducted Andrea into its exclusive membership. She is just one of two women among the 46 members of the Guild.

Both Andrea and Chris were trained in the premiere wine programs of their respective countries.  Andrea, who is originally from San Francisco, studied at UC, Davis, while Chris, who grew up in Joannesburg, trained at Stellenbosch University. Together, they craft some of South Africa’s very best Rhone-style wines at their eponymous winery.  They contract and manage vineyards in the Swartland with aspirations of planting their own.

Andrea started making wine in South Africa, and met Chris at a wine festival in, of all places, Champagne.  Chris made wine at Tulbagh Mountain Vineyards and at Reyneke before setting out on his own. Today the two of them work as a real team making some of South Africa’s most elegant wines. They pick earlier than some, resulting in wines with lower alcohol and more finesse than much of the wine coming out of the warm Swartland.

Awards are flying the Mullineux way. Not only was Andrea inducted into the prestigious Cape Winemakers Guild, but the Mullineux 2010 Syrah was named Wine of the Year by the 2013 edition of Platter’s South African Wines.  The US importer is Kysela Pere et Fils of Winchester VA.

We provide our assessments of three of their wines below.  All our reviews of the Mullineux Family wines can be found in our review article (available to subscribers) at www.iwinereview.com.

Kloof Street is the name of the Mullineux’s entry level line. They offer a red blend, a white blend, and a single varietal Mourvèdre made specifically for the US market and imported by Kysela. The Kloof Street line offers great quality relative to price. Here, we give our review of the Kloof Street Rouge.

Beginning in 2009, Mullineux started producing two iconic Syrahs, one grown granitic soils and one grown on schist soils. While their standard Syrah is widely recognized as one of the very best produced in South Africa (the 2010 vintage won the 2013 Platter’s South African Wine’s “Wine of the Year”), but the Granite Syrah and Schist Syrah are at a still higher level. Our review of the  Schist Syrah follows:

Mullineux 2010 Schist Syrah ($125) 94 Schist is more narrowly focused and structured than the Granite savory, pungent earth and violet aromas. It shows rich, bright fruit, smoked meat, and minerals on the palate, finishing super-long with thick dark fruit extract. Alc 13.5%. Made from a single parcel of 15 year old vines grown on the shale and schist soils of Riebeek Kasteel Mountain. Sees about 15 months in 500 L French oak, half new.

Andrea and Chris make one of the world’s best sweet wines from dried Chenin Blanc grapes.  It’s an amazing wine, as described below: