THE WINE OF JAPAN: KOSHU 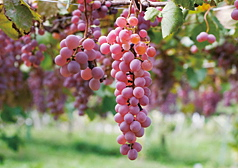 Koshu, a pink-skinned vitis vinifera grape, arrived in Japan about a thousand years ago, just how and when is not precisely known. What is known is that wine has been made from Koshu since the 19th century and that it grows best in the Yamanashi prefecture south of Tokyo, near Mt. Fuji.  Indeed, 95 percent of all Koshu is grown in Yamanashi. Traditionally, Koshu was made sweet, but, thanks to pioneers like Shigekazu Misawa of Grace Winery, several wineries are now making dry wines of relatively low alcohol (11.5%).  On a recent visit, we found a great deal of experimentation, both in the vineyard and the winery, and a trend to using estate as opposed to contracted fruit. Today there are over 80 producers in the prefecture, although only a few are members of  Koshu of Japan, a body set up to promote exports of high quality Koshu. 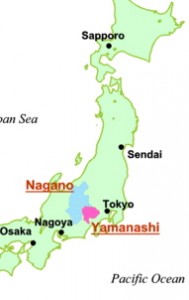 Located about two hours south of Tokyo by train, the “Japanese Alps” of the Yamanashi Prefecture where Koshu grows often has wet summers, but Koshu resists rot and, while it ripens late (end October), retains a good amount of natural acidity. The skin of the grape is bitter, so most winemakers minimize contact between the juice and skin after pressing. Older vineyards are trained pergola style with immense old vine trunks supporting vines that extend 30-50 feet in radius, but newer vineyards are being planted European style with VSP trellising at higher altitudes. The character of the Koshu grape varies with altitude, soils (which range from alluvial to clay, gravel, granite and even volcanic in origin), exposure, and yields. Growers are especially excited about the high altitiude (700 meters) mountain slopes in the Akeno-cho area where clay and basalt soils, masal selection, and modern trellising are producing superior quality fruit. Average yields are about 5 tons per acre [13 tons/hectare], but quality-oriented growers get lower yields. 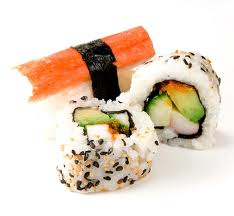 Koshu with Food  Koshu is a crisp, subtly flavored wine with a freshness and minerality reminiscent of Muscadet.  It often has a pleasing, light bitter note on the finish. It pairs beautifully with the light flavors of much Japanese cuisine, especially sushi made with white fleshed fish, scallops, shrimp and squid and seasoned with a bit of wasabi, lemon juice, and salt.  Koshu that is oak-fermented or made from especially ripe fruit can pair with more substantial chicken and tempura dishes. Sparkling Koshu can be consumed as an aperitif, although drier versions go best with seafood.

Tasting Notes  Tasting notes on selected Koshu wines of three producers follow.   The Lumiere and Grace wines were tasted at the wineries, while the Chateau Mercian was tasted in Tokyo. The wines are scored using the 100 point system. 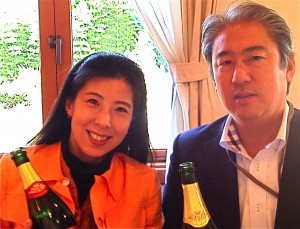 Lumiere.  Lumiere is one of just three biodynamic wineries in Japan.  Founded in 1885, it is also one of Japan’s oldest, continuous functioning wineries.  The current winery is also the site of an old, stone walled traditional press.  Kazu and Shigeki Kida  manage this family winery; Shigedi is the 5th generation of the family to make wine. Lumiere’s sparkling wines, made using the methode champenoise, are especially successful, with fine bubbles and elegant character. Lumiere also makes a number of other wines, including an ishigura (traditional stone tank) wine from its historic, traditional press.

Lumiere 2010 Petillant  89  A sparkling wine of subdued flavors but elegant mouth feel showing fine bubbles and a creamy texture.  With just 8g residual sugar, it comes off as very dry and fine.

Lumiere 2011 Koshu 88  Made from Iwade area grapes, this light medium straw colored wine spends about 6 months sur lie.  It’s quite refined with pear and light mandarin aromas and a clean, stony palate showing lemon citrus notes. It paired beautifully with a bouillon of seaweed and fish at the Lumiere restaurant.

Lumiere 2012 Frère Koshu 87  A very young wine made from the Minami-noro vineyard near the winery. It’s very fresh and crisp with simple apple like aromas and flavors and mineral notes on the finish.

Lumiere 2010 Petillant Orange 88  This medium gold colored wine is fermented on the skins. It has a floral nose of rose petals and orange skin and a fine, flowery palate with light musk and tangerine flavors. It’s well-balanced and dry.

Lumiere 2009 Hikari 89  Koshu made from Lumiere’s biodynamic estate vineyard. Fermented and aged in barrel for two years, this wine has a heavy oak character, much like traditional, oaked white Rioja. The nose shows hazelnut and a hint of burnt sugar, while the palate is creamy with notes of butter, Scotch whiskey, and dried herbs. Unusual, but good.

Chateau Mercian.  Mercian is a large wine and spirits company that owns, among other things, Markham vineyards in California and Chateau Reysson in Bordeaux. The Chateau Mercian winery was established in 1970, and in 2003 it established its estate vineyard Mariko. The Kirin Brewery assumed ownership of Mercian in 2010.

Chateau Mercian 2011 Koshu Kiiroka 87 This wine is lightly fragrant of white flowers and grapefruit zest with a nicely balanced palate showing notes of lime zest and grapefruit and finishing clean and chalky.

Chateau Mercian NV No Awa Katsuma 87  The Mercian sparkling Koshu is reminiscent of an Italian prosecco with a notable fruity character. It’s simple and easy drinking in style. 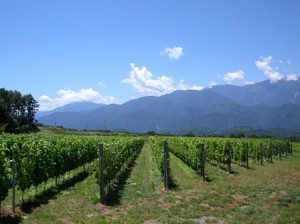 Grace Winery.  Established in 1923 in Katsunuma, the Grace Winery is headed by Japan’s Koshu pioneer, Shigekazu Misawa, with daughter Ayana now taking the lead in winemaking. Misawa led the way in training vines VSP instead of the traditional pergola, and he was the first to plant vines in the high altitude Akeno area.  Vineyard designated bottlings illustrate how Koshu is influenced by its terroir. Grace also makes a delicious rosé wine from Cabernet Franc and Cabernet Sauvignon as well a surprisingly successful Bordeaux blend aged in new French oak.

1 Response to THE WINE OF JAPAN: KOSHU