Book Review: Roy Cloud’s To Burgundy and Back Again 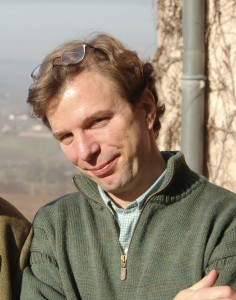 There are many books on wine. Most are low calorie, fluffy tomes. Some are pedantic and boring.   A very few are actually fun to read.  Roy Cloud’s To Burgundy and Back Again [Lyons Press, Guilford, CT] is one of the latter.  This is a serious wine book that tells a human story of perseverance in the face of loss. Roy’s father has a serious accident while biking through Burgundy, and month’s later Roy finds himself touring the same area in an unexpected search for wines to import to the US.  Years later, he buys out his previous employer and forms Vintage ’59, a Washington, DC, based import company that specializes in artisanal French wines.

This book reads like a thriller, meaning it’s the type of book you pick up and can’t put down.  Not speaking a word of French, Roy heads for France to try to convince French winemakers, who don’t speak a word of English, that they should trust him to import and market their wines. Fortunately, Roy’s brother, who is fluent in French and in the midst of marital tribulations, is not unwilling to join Roy in this pursuit.  The book is about their search for good wines and the winemakers who are willing to take a flying leap with an importer they know nothing about, excepting his special tasting abilities.

It may not happen, but one can imagine some low budget director following the example of Sideways and making a movie of this book.

This book is so well written that I presumed Roy had a very talented ghost writer, until I read the back cover and discovered that Roy holds an MA in writing from New York University.  Here’s hoping that this book isn’t a one off.  The wine world needs more writers (and importers) like Roy Cloud.