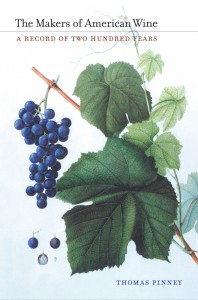 The Makers of American Wine is the kind of book that readers of the International Wine Review should love. It’s a beautifully written, thoroughly detailed and documented history of the successes and failures in the development of American wine over the past two hundred years.  But this is no turgid tome. It is a fascinating history told through the lives of 13 people who played an important role in American wine from Independence to the late 20th century.   While they are key actors in America’s wine development, especially in terms of research, writing, and entrepreneurship, their role in this book is to serve as an entertaining vehicle by which to relate a two hundred year history.

When it comes to wine, America has had more failures than successes. Tempted by the sight of wild grapes growing profusely in the American wilderness, pilgrims and settlers everywhere tried and failed to grow the European Vitis vinifera varieties. From the first Virginia plantings in 1619 through Thomas Jefferson’s attempts to establish a vineyard at Monticello in the late 18th century and, as Pinney relates, well into the 19th century, vinifera vines succumbed to American maladies like phylloxera, powdery mildew, downy mildew, black rot, and Pierce’s disease.  And once these problems were solved—first, by planting in California and, second, by adopting the remedies invented by the French—the vagaries of wine markets and the prohibition of wine in the early 20th century took their toll. It wasn’t until well after World War II that growers in California began planting the right varieties and winemakers began making varietal wines that didn’t carry meaningless names like Chablis and Burgundy. And once that happened the California wine industry we know today was created.

Pinney tells the major events in this two hundred year long story by relating the achievements of 13 outstanding individuals.  Many of these individuals and their stories are unfamiliar to most wine lovers [but perhaps not most wine historians], and that is part of the value of this book.  And, strangely enough for a book on American wine history, neither Thomas Jefferson nor his Italian winemaking friend Philip Mazzei figure. But that’s just as well, considering all that has already been written on those two.

The early chapters of the book deal with the trials and tribulations of growing grapes and making wine in the eastern half of the US and the important role of immigrants, especially the Germans.  The chapter on John James Dufour relates how native hybrids—spontaneous crosses between the European Vitis vinifera and the American Vitis labrusca vines—were discovered and their success—especially the Catawba, in unlikely places.  The chapter on George Husmann tells us how this immigrant settled in Hermann, Missouri, where a German-speaking community learned to make wine from another hybrid—the Norton grape, developed a nursery that provided phylloxera resistant rootstock to, first, the Europeans and, second, Californians, and finally moved to California, symbolizing the transfer of the locus of American wine from the East to the West.

Excepting a fascinating chapter on the Russian-German immigrant, Dr. Konstantin Frank and another on the North Carolina winemaker and merchant Paul Garrett, the rest of the book deals with California.  Another German immigrant, Charles Kohler, a musician by training, started out by producing wine in Los Angeles and ended up marketing California wine to the rest of the country and even the world. The cycles of the wine industry took a nasty turn in the late 19th century leading another key figure, Percy Morgan, to create the California Wine Association (CWA), a monopoly that controlled prices of both grapes and wines but also introduced California to variety-specific wines aged and bottled at the winery. Prohibition killed the CWA as well as much of California’s winemaking expertise, and the recovery took decades.

The final chapters deal with more familiar names and topics:  the mass marketing success of Ernest and Julio Gallo, the wine education of the American public Frank Schoonmaker, matching California terroir to specific varieties (Maynard Amerine and A.J. Winkler), the focus on quality in California wine (Robert Mondavi), the rise of the woman winemaker (Cathy Corison), and the adaptation of Vitis vinifera to the cold growing conditions of the Finger Lakes (Konstantin Frank).

By telling America’s wine history through the lens of 13 actors, Pinney has created a very readable, and historically detailed, book. Each of the 13 chapters tells an independent story, so it’s easy to read one chapter at a time and not fear losing track of the overall history. And that is in one sense the disadvantage of writing a history book this way. While the chapters are organized chronologically, it isn’t easy for the reader to understand exactly how each actor fits into the overall history and how they relate to each other. For example, we learn that Charles Kohler was one of the fathers of the California wine industry, but it’s not clear how important a figure he is relative to other wine producers and merchants of the time.  The focus on the individuals who are the subjects of the chapters sometimes comes at the expense of fully understanding the larger context in which those individuals worked.  [Of course, anyone who has already read Pinney’s two-volume A History of Wine in America is already familiar with the bigger picture.]

The Makers of American Wine is a delightful and thoroughly entertaining book to read. One feels compelled, much as in a murder mystery, to keep reading and not put the book down in order to find out what happens next. Best of all, this is a book that reveals an incredible amount of new and original information. How else would I have learned that in Washington, DC, not far from my home, there once existed a vineyard that played a minor role in America’s wine development?

The Makers of American Wine: A Record of Two Hundred Years, authored by Thomas Pinney, is published by the University of California Press, Berkeley CA.