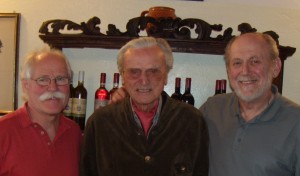 Brunello di Montalcino is truly one of the world’s great wines.  It is also Italy’s best expression of Sangiovese.  In good vintages, the wines show beautiful fruit, elegance and power, with the structure to permit extensive aging.  The high acidity and firm tannins of the wine give rise to slow evolution in the bottle and can show surprising complexity and freshness decades later.  During our visit with Franco Biondi-Santi, the renowned pioneer of Brunello, he related opening one of his remaining bottles from the 1891 vintage on the occasion of his 60th wedding anniversary, and the wine was still fresh and delicious. In this article we assess the 2007 vintage of Brunello di Montalcino. Reviews of over 300 wines from the 2007 and older vintages can be found in our just released Report # 31: Brunello di Montalcino.

We traveled to Montalcino this spring at the invitation of the Consorzio del Vino Brunello di Montalcino to taste the new 2007 releases and older vintages of Brunello to better understand this special wine. We were surprised and pleased by what we found, both in our visits to the wineries and in our earlier tastings of Brunello at home and at VinItaly in Verona.   We found incredibly well balanced wines showing mostly bright red fruit with very little noticeable oak. While most Brunello wines are firmly tannic, we were surprised at how approachable many of them are (especially from the 2007 vintage) while still relatively young.

In what follows, we discuss the vintages and styles of Brunello we found on our visits to Castello Banfi, Biondi-Santi, Casanova di Neri, Conti Costanti, Talenti, Uccelliera, Il Poggione, and other estates. Our two sentence summing up on the vintages:  “If you’re new to Brunello, go for the 2007s that are just coming on the market—many of these wines are drinkable now. If you’re interested in maximizing your pleasure, go for the 2006s, one of the very best vintages in a long time and one with a very long life ahead of it.” Whichever vintage you choose, you’re in for great drinking pleasure.

One of the delights of Brunello is the many expressions it takes, depending on vintage and location of the vineyard.  Vintage variations are especially significant. We mostly tasted Brunellos from the 2006 and 2007 vintages and Rossos from the 2009 and 2010 vintages, but we also had the opportunity to taste older wines from the 2004, 2001, and 1999 vintages.

The most recent Brunello vintage—2007—is surprisingly accessible and ready to drink. Many of the wines even look evolved, often with garnet red colors fading to brick at the rim.  In general, the wines are elegant, soft and fruit forward with good tannic grip.  Most of these wines could be enjoyed over the next five to seven years.   Their early drinking potential makes these wines the perfect introduction for consumers who are new to Brunello. The 2007 vintage is just now entering the market in the US.

The previous vintage—2006—is more classically Brunello showing superb structure and the acidity, earth and mineral notes for which the wine is famed. These should be long-lived wines that would be best laid down for five plus years before drinking, although adequate aeration will help make some wines approachable in their youth. In our opinion, 2006 is the best vintage since at least 1997, which coincidentally was the vintage we tasted on our last trip to Montalcino.

We also tasted a large number of 2006 Riservas. The Consorzio rules require that Riservas spend the same amount of time (24 months) in oak as regular Brunellos. Some wineries do a barrel selection for their Riservas, while others do a vineyard selection—many Riservas are in fact single vineyard wines, but most don’t carry a single vineyard designation. In any case, Riservas tend to be bigger, more concentrated, and more tightly structured than regular Brunellos and require additional years in bottle prior to consumption. Riservas are made only in exceptional vintages, but it’s up to each winery to decide whether a vintage merits a Riserva. We tasted vintages from 2006, 2005, 2004, and 2001, but in most cases only the 2001s are becoming ready to drink.

Vintage aside, we found a range of Brunello wine styles that vary by producer and growing region. While there are a few producers in the northwest (Bosco) and northeast (Torrenieri) regions of Montalcino, the vast majority of Brunello wines come from around the town of Montalcino, the southwest area near the hill town of Sant’Angelo in Colle, and the southeast near Castelnuove dell’Abate and its famous, 12th century Abbey of Sant’Animo. These areas differ in terms of climate, altitude, and soil.

As a general rule, the grapes grown around the town of Montalcino proper produce red-fruited, tightly structured, elegant wines, while those grown further south yield darker fruited, full bodied wines, reflecting the warmer climate of the south. But every rule has its exception, and we found plenty, revealing both the heterogeneity of growing conditions and of winemaking practices in Montalcino.  Happily, there are many styles of Brunello to choose from, although most wines can be placed in one of two major styles.

The iconic Brunello is that of Biondi-Santi. The oldest producer in the region, Biondi-Santi is the foundation of Brunello’s reputation. With its Greppo estate vineyards located just south of the town, this winery produces the superb, traditional Brunello style.  In contrast, 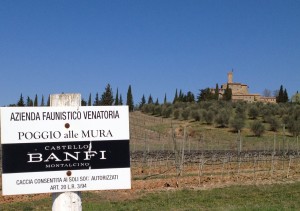 Castello Banfi  is the region’s largest producer, making its Brunello wine the most widely distributed throughout the world. Banfi is located near Sant’Angelo with lower altitude, warmer vineyards that yield a more fleshy, accessible style of Brunello. Which style wine one prefers is a matter of taste, price and marketing, as well as consumption preferences.

In addition to terroir, Brunello also varies by winemaking practices, including the use of oak. Traditionally fermented in cement or large oak casks and aged in large botti made of Slavonian oak, a number of producers today use smaller, French oak barriques for aging wines.  This practice has come under some criticism from the traditionalists, but we don’t agree. In tasting over 250 wines, we found very few over-oaked wines.  When the fruit is ripe, the judicious use of French barriques contributes to the richness and balance of many Brunello wines and does not result in an excessive oak character.

Produced in a relatively small geographic area, Brunello is made in modest quantities.  While the wines are often expensive ($50+), they are priced low relative to high quality Burgundy and Bordeaux.  Once the newly affluent customers of the world discover Brunello, prices will rise significantly. Our recommendation: purchase now, while you can.

Our Report # 31 Brunello di Montalcino goes into considerable depth on the styles and producers of Brunello, including reviews of over 300 Brunello and Rosso di Montalcino wines.   Available to subscribers at www.i-winereview.com