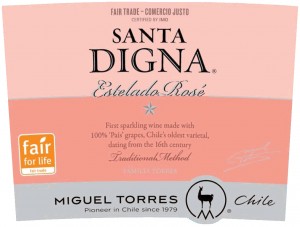 Earlier this month we tasted a unique sparkling wine at the Wines of Chile Grand Tasting in New York. That wine is Fair Trade certified, made with the Western Hemisphere’s oldest wine grape, and developed specifically to aid small growers who’ve not benefited from Chile’s great wine boom. It’s also being exported to the US and other countries and sold at a very reasonable price. Our review of the wine comes at the end of this article.  But, first, a little history.

As the Spaniards conquered the Americas in the 16th century, the Spanish monks charged with converting the native population brought with them a robust grape to make sacramental wine. That grape became known as País in Chile, Criolla Chica in Argentina, and the Mission grape in California. However, as DNA research has shown, the real name of the grape was Listán Prieto, a grape widely grown in Castile in the 16th century but now hardly grown at all.

Little remains of the Mission grape in California—just about 1000 acres. But País is still widely grown in Chile, where is mainly used to make inexpensive rustic beverages like chicha and to distill to alcohol.  The 37 thousand acres [15 thousand hectares] of País makes it the second most planted variety, after Cabernet Sauvignon.  Many of the farmers who grow the grape live in the southern valleys of Maule and BíoBío where they eke out a living in the arid climate.

In 2007, at the initiative of our friend Mariano Fernández, former Chilean Ambassador to the United States and former Minister of Foreign Affairs, the Government of Chile provided funding to the University of Talca and the winery Miguel Torres Chile to produce a wine from País that could be commercially successful and would increase the demand for and price of País grapes.  The product they produced is a sparkling wine made by the methode champenoise. Their success is evidenced by Wines of Chile naming the Santa Digna Estelado Rosé Chile’s best sparkling wine, an assessment in which La Guia de Vinos Descorchados concurred.

Santa Digna Estelado Rosé is certified Fair Trade, which means the profits from its production by Miguel Torres are returned to the growers, with a Council of Growers administering the funds for social development projects.

So, how’s the wine?  The Miguel Torres 2011 Santa Digna Estelado Rosé Valle de Maule, a 100 percent País based wine, is pale pink in color with herbal and dried cherry aromas and flavors. It has a nice elegant mousse and pleasant, very dry mouthfeel with bright acidity. Try this wine as a curiosity, but enjoy it as a quality sparkling wine.  Importer: Dreyfus Ashby, New York, NY

For more on Miguel Torres and Chilean wine, consult our Report # 21 The Chilean Wine Revolution and numerous wine review articles and articles about Chilean wines on this blog.