Located in the heart of Morgon, one of the Cru appellations of Beaujolais, the Domaine Gérard Brisson makes both Beaujolais-Villages and Morgon Cru Beaujolais wines that reflect the terroir of the region.  Gérard Brisson is owner/winemaker of the estate since 1974 when, upon completion of his enological studies at the Université de Dijon, he joined his father Michel at the family winery, which has 10 ha of vineyards. Today he is one of the leaders of sustainable winemaking (agriculture raisonnée) in the region.  He also offers tours of the estate and adjoining areas in this classic 2 CV. [Even James Bond drives one.]  In this article, we review his 2010 new releases imported to the US. 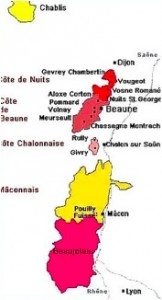 wines are made with the Gamay Noir grape and produced using semi-carbonic maceration that results in a Bistro-style, fruity wine with low tannins. While best known for the fruity, fresh Beaujolais nouveau, Gamay Noir can also produce serious wines. Beaujolais is made of the Gamay Noir grape, a cross of Pinot Noir and an ancient white variety called Gouais.

Beaujolais’ vinous history begins with the Romans, who planted vineyards in Morgon, and continues with the Benedictine monks who nurtured the vine in Beaujolais for 500 years.  Today, Beaujolais is one of France’s most important wine growing regions with over 20 thousand hectares of vineyards covering three quality classifications: [1] Beaujolais AOC, covering 60 villages and mostly producing Beaujolais Nouveau; [2] Beaujolais-Villages AOC, covering 39 villages in a hilly region of granite and schist soils; and [3] Cru Beaujolais, covering 10 villages, producing full-bodied wines that can be aged. With its granite and schist soils, Morgon is one of the Beaujolais Crus; it has a reputation for producing earthy wines with a Burgundy like character.  Les Charmes, which is the source of the wine we review here, is one of 6 vineyard appellations in Morgon.

This is an easy-drinking Beaujolais, richly aromatic. It reveals a full palate that is straightforwardly flavored of fresh red fruit. The fruit is hand harvested and undergoes semi-carbonic maceration with no destemming and no oak.  It’s made of 100 percent Gamay Noir, produced in sandy soils with a yield of 50 hl/ha and matured in concrete tanks. 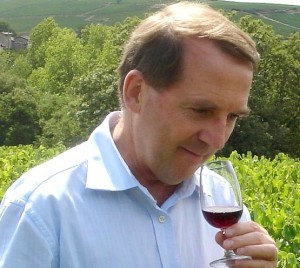 This medium dark ruby Beaujolais is a rich, earthy wine of considerable depth and charm. The nose reveals fresh dark red cherry and plum fruit, while the palate shows bright acidity and a firmly tannic brew of fresh fruit, spice and earth. Very, very good. The vineyard parcel in Les Charmes that yields the fruit for this wine is located in decomposed granite soils at 320 meters altitude. The fruit is hand picked and matured in concrete and stainless steel.